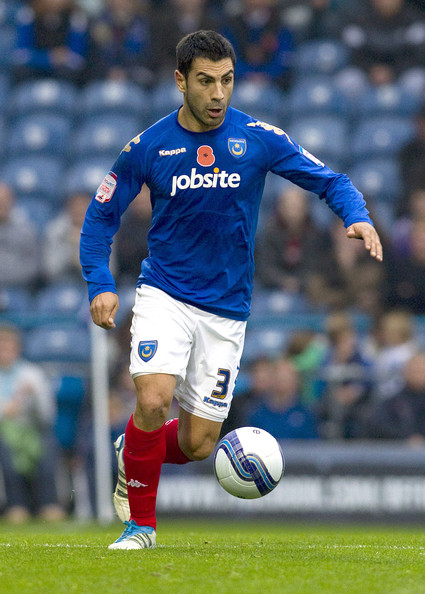 Ricardo Rocha is in talks over a shock return to Pompey.

Caretaker boss Guy Whittingham has offered the free agent a way back into football.

The 34-year-old was released by Michael Appleton at the end of last season after 76 appearances for the Blues.

Since then, he and his family have moved out of their Fareham home and gone back to Portugal.

But following unsuccessful trials at Ipswich and Leeds this season, Rocha remains without a club.

Now Whittingham has moved to bolster his defence by broaching the possibility of the former Benfica man making what would unquestionably be a popular return.

The early response from Rocha has been encouraging.

And Whittingham is hopeful he can pull off a deal.

He said: ‘I have had contact with Ric. There is a long way to go but he is one of the guys I would like to bring back.

‘There are two willing parties trying to do it. The circumstances we are under doesn’t make it that easy, but I think he would love to come back and we would love to have him back – so we’ll see how we go.

‘He has always stayed in touch. When I got the caretaker role, one of the first texts I had was from him wishing me all the best – and that’s where it started.

‘Ric’s over in Portugal at the minute. I know he has kept himself fit and hired a personal trainer.

‘It’s just a question of trying to get our heads together and thinking if we can meet somewhere along the way where we can get an agreement done.

‘It may not be something we can do immediately. It could be something that might not happen until January with all that is happening here.

‘He’s a big family man and loves to be around them. I can understand him not coming straight away at the drop of a hat, there are a lot of things to sort out.

Rocha remains a hugely-popular figure at Pompey following two-and-a-half seasons with the club.

During that time, Whittingham worked with him and would relish having his defensive ability in his side.

He added: ‘I always remember the semi-final against Spurs when Ric and Aaron Mokoena were absolutely superb at the back, blocking everything.

‘He might be one of those who doesn’t play every single game. You may have to rest him for a few, but we have got some young lads here who would learn so much from his experience.

‘I don’t think there are too many players around who read the game as a centre half as well as he does.’

Centre-back Rocha, 34, who once joined Spurs in a £3m plus deal is a former Portugal international and starred 35 times in Pompey's ill-fated relegation season last term.

Neil Warnock admitted Rocha was far from fitness and he was at Ipswich for an unsuccessful trial following his departure from Fratton Park in the summer.

Maybe he will feel more at home alongside Messers Pearce, Varney, Norris and Ashdown?

Ricardo Sérgio Rocha Azevedo (born 3 October 1978), known as Rocha, is a Portuguese footballer who plays for Portsmouth in the Football League Championship, as a defender.

Rocha was born in Santo Tirso, Porto District. Having made a name for himself with perennial UEFA Cup qualification candidates Sporting de Braga, and making his first division debuts during 1999–2000, he moved to national giants Sport Lisboa e Benfica in December 2001, along with teammates Armando Sá and Tiago, and developed into a fierce stopper with good marking ability.

During his four 1/2 seasons with the Lisbon club, he made a total of 162 appearances and scored three goals, which included 33 matches in European competitions. He added 25 matches in the 2004–05 league campaign, as the Reds ended an 11-year drought and conquered the national championship.

On 28 March 2006, Rocha had a widely lauded performance in the UEFA Champions League quarter-finals first leg against eventual champions FC Barcelona, marking Ronaldinho out of the game in a 0–0 home draw (0–2 aggregate loss).[1]

On 17 January 2007, stories hit the Portuguese and English media confirming that a move to Tottenham Hotspur was a possibility. The following day, Portuguese newspapers reported that the move was imminent following a meeting in Lisbon between Tottenham chairman Daniel Levy, former Tottenham player turned agent Ronny Rosenthal and the Benfica president, with a price of €5 million (£3.2m) plus two friendlies between the clubs, with Benfica receiving all profits from the gate receipts and television money, being arranged.

Rocha was signed by Tottenham for an undisclosed fee thought to be around £3.3 million on a three-and-half-year deal, on 23 January 2007. He played his first game on 27 January, in the 3–1 win over Southend United in the FA Cup fourth round, in place of captain Ledley King who was injured at the time. On 10 February he played his first Premier League match for the Spurs, against Sheffield United.

Rocha made just five league appearances for Tottenham in 2007–08, and none in all competitions in the following season.[3] He was eventually released on 14 June 2009, after his contract expired.

On 31 August 2009, Rocha moved to Belgium with Standard Liège, on a one-year deal.However, his contract was terminated on the 30 January 2010.

On 1 February, 2010  he returned to England, signing a two-year deal with Portsmouth, making his debut in a 5–0 defeat at Manchester United five days later.

Rocha was sent off in his next two Portsmouth games, against Sunderland on 9 February, and late-on in his return game against Burnley, on 27 February. Things improved for the defender when he put in a Man of the match performance in Portsmouth's FA Cup semi-final victory over former club Spurs.

In the 2010 summer, Portsmouth offered Rocha a new contract, on 4 September, he re-signed with the club, with the two-year deal being officially confirmed by the team six days later. He was sent off in two consecutive games, against Reading (0–2 loss) and Cardiff City (0–3 defeat), finishing the season with 29 league appearances as his team ranked in 16th position.

In his second season at Portsmouth Rocha, along with Dave Kitson, fell out of favour with Steve Cotterill, but the manager left for Nottingham Forest in mid-October 2011.

Rocha finally had to leave Pompey in the summer of 2012 due to the club being in administration and unable to retain high earning players.

After making his full debut for Portugal in 2002 against Scotland, Rocha returned for two UEFA Euro 2008 qualifiers against Finland and Denmark, after a three-year absence, as he was not a regular starter at Benfica then.