PHOTO: Scott Allan who scored his first goal for Pompey against Crystal Palace .

Scott Allan has waved a fond farewell to Pompey after his latest loan spell ended.

The Scottish midfielder’s stay expired after last night’s 2-0 loss at Walsall and he returns to his parent club West Brom on Monday to leave Pompey down to just 18 players in their squad.

As yet, there are no plans for him to return to Fratton Park and Allan has no idea if the Baggies will even let him out on loan again.

He said: ‘That was my last game and I’m back to West Brom from Monday.

‘You can’t say much about whether I might be back in the future. Nobody really knows what may happen at this club at the moment.

‘If I come back some time, then great but if I don’t, I will look back on my time at a great club with great fans and say “thank you” for the experience.

‘And I’d like to wish everyone connected to the club all the best for the future.

‘Who knows where I will be going next? I need to see if the club is going to get itself back on its feet again.

‘I need to look after myself as well but, to be honest, it’s all down to West Brom.

‘If they say “yes” to me going out on loan, then fine.

‘If they don’t, I have to get my head down and work hard there.’

Allan’s final game for the club ended in disappointment as Pompey fell to yet another defeat in their awful 14-game winless run.

Despite a bright opening, the Blues found themselves 2-0 down at half-time and Allan was unable to rescue Pompey after coming on as a substitute at the interval.

He said: ‘It’s a disappointing way to finish. We gave away sloppy goals yet again and we couldn’t find a way back into the game.’

Published in the News Monday November 5, 2012

Scott Allan will remain with Pompey – despite a three-match suspension.

The on-loan West Brom midfielder was shown a straight red card by Darren Sheldrake for his challenge on Andre Boucaud in Saturday’s FA Cup clash at Fratton Park.

But despite being eligible for only two of the Blues’ next five matches, the Scot will stay on the south coast for the remainder of his initial one-month loan, as Football League rules stipulate a loan player cannot return to his parent club within 28 days.

Appleton said: ‘Even if you thought there might have been a way round it in terms of mutually agreeing to discard the contract, you can’t do that.’

Pompey have re-signed Scott Allan on a month’s loan.

The Scottish midfielder enjoyed a successful loan spell with the Blues last term, making 15 appearances and scoring one goal between February and April.

But after failing to force his way into West Brom’s first-team plans at the start of this term, the 20-year-old has just finished a short loan spell at Pompey’s League One rivals MK Dons.

While he struggled to get a starting berth with the Dons, he knows Blues boss Michael Appleton well from their time together at the Hawthorns.

Allan certainly made an impact for the Blues last term and will be welcomed back with open arms by Pompey fans as he goes straight into the squad for tonight’s League One clash at Sheffield United.

Published in the News on Friday 5 October 2012

Michael Appleton admitted he made an effort to bring Scott Allan back to Pompey as he gets set to face his former charge. The Blues boss revealed he made an enquiry about bringing the midfielder to Fratton Park again as Appleton prepares to go up against the 20-year-old at MK Dons.

Allan, who made 15 appearances for Pompey and scored one goal while on loan from West Brom last season, could face his old side tomorrow after agreeing a temporary move to Karl Robinson’s outfit.

Appleton would have loved to see Allen in a royal blue shirt again – but simply couldn’t afford to fund a move. Appleton said: ‘I’ve got a lot of time for Scott. We’d love to have him here but he’s at MK Dons at the minute.‘He never quite went to Crystal Palace, who were also interested, because they couldn’t quite agree on things finances-wise.‘And he was certainly out of our pay bracket when I enquired a month ago.‘So they must be doing something right at MK Dons in terms of budgets – and fair play to them. They’ve got a good, good player and if he does play he’ll be desperate to do well. ‘He’s someone we’d have to keep an eye on massively.’

Allan has been on the bench for the past two games for his new side. Appleton believes some managers would have been put off making a move for the Scot because he is hard to accommodate in a line-up. But the Pompey boss reckons Allen proved last season that nothing could be further from the truth.‘He’s a good footballer. He’s one who sometimes would like a free role and that maybe scares a lot of managers,’ said Appleton. ‘I genuinely thought he could play in a 4-4-2 or 4-3-3.

‘I played him in numerous roles last season – I even sat him in front of the back four in one game because I knew the opposition would set up to deal with him behind the front men. ‘So he’s had the responsibility to take on different roles, whether it’s been on the right, left or in central areas.’ 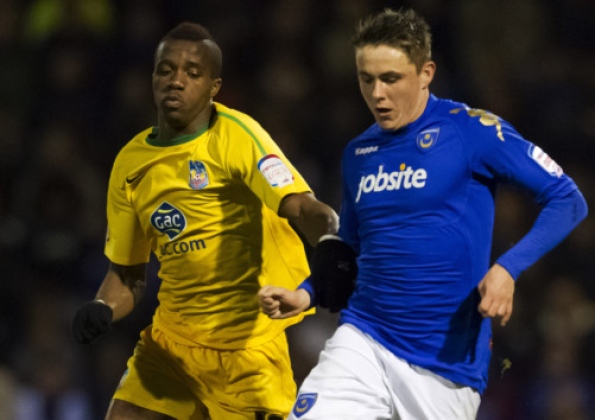 Photo above: Scott Allan attempts to get away from Crystal Palace winger Wilfried Zaha during Tuesday's victory at Fratton Park

Personal pride is driving Pompey’s players on to achieve the impossible.That is the verdict of Scott Allan as the Blues attempt to beat the odds and remain in the Championship.

Successive victories over Doncaster and Crystal Palace have taken Michael Appleton’s men to within five points of fourth-from-bottom Bristol City.

Just two matches remain, with Derby visiting Fratton Park on Saturday, before the Blues make the trip to Nottingham Forest a week later.

It was Allan’s deflected goal which put Pompey on the road to defeating Crystal Palace 2-1 on Tuesday night.

And he revealed their self-respect won’t let them ease up in the fight to avoid the drop to League One.He said: ‘Every time we step on the pitch there is personal pride.‘We are all football players and nobody wants to be relegated.

‘So that’s the way we look at it when we go on to the pitch. We want to win a game of football. ‘Anybody can beat anybody in this league. That’s what makes it possible for Bristol City to lose their next two games and for us to win.

‘We are doing our bit and looking after ourselves first and foremost, though.‘It would be good to take it to the last day of the season. If that’s the case then you never know what could happen. ‘That’s what we are looking forward to trying to achieve. ‘I don’t know much about Derby, to be honest – but it’s not about them.‘We need to go out and do what we have been doing to win the game. Simple as that.’

In-form Chris Maguire will have to sit out the encounter with his parent club under the terms of his loan deal.That will open the door for one of Appleton’s squad to step in. And Allan is confident the winning candidate won’t let anyone down.

He added: ‘We are without Chris, but that opens the door for other players. There are people like Marko Futacs and Ashley Harris as well.‘They are capable of coming in and doing a really good job. ‘Chris is going to be a big loss but there are good players to come in and get us the three points.’ 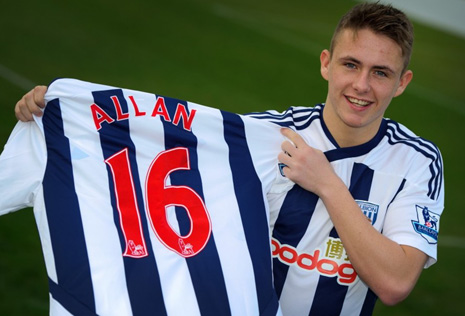 Despite the Blues losing Erik Huseklepp to Birmingham City, it didn’t take Pompey long to replace the Viking in terms of numbers, with an emergency loan from West Bromwich Albion for Scottish midfielder Scott Allan.

Allan, 20, arrived at the Hawthornes in January for £300k from Dundee United and is yet to make a first team appearance for the Baggies. However, with Appleton’s strong links with his former club, the Premier League outfit have agreed to help out Pompey and loan Allan on an initial one-month deal.

The young Scot will also join another West Brom player on-loan at Fratton Park, George Thorne, who said on Twitter: “Scott Allan’s coming to join me on loan at Portsmouth! Welcome him Pompey Fans!”

Allan went on to thank the Pompey fans himself for the warm welcome on Twitter: “Thanks people. Also the weather is outstanding! Looking forward to wearing the red white and blue.”