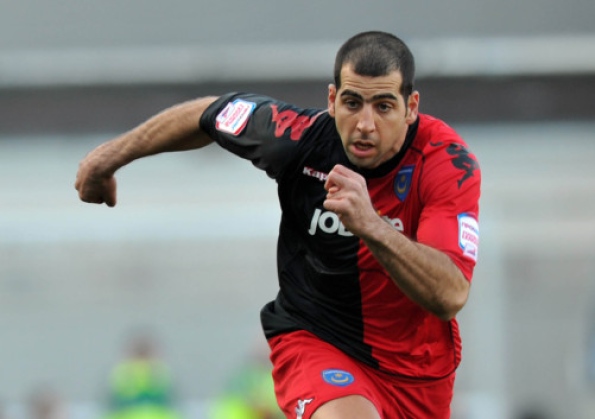 On 31 August 2009 it was announced that Portsmouth had signed Ben-Haim on a four-year deal. He was one of the two first choice centre-backs under managers Paul Hart and his former manager at Chelsea, Avram Grant. he suffered an injury in the second half of the season, which kept him out of Portsmouth's FA Cup final game against Chelsea, which Pompey lost 1–0. In May 2010, after Portsmouth had been relegated, Ben Haim left the club as there was a relegation-release clause in his contract. He played for just one season for Portsmouth and made 24 appearances for the club in all competitions.

In July 2010 Ben Haim was set to join his ex-Portsmouth manager, Avram Grant at West Ham United on a free transfer, but it was reported that the move had collapsed after Ben Haim had failed a medical. On 2 August the Israeli press reported that Ben Haim had agreed terms with West Ham on a three-year deal after passing a medical with Ben Haim considering legal action against the reporter who had published reports about his failed medical He joined West Ham on 3 August 2010 on loan until January 2011 with a view to a permanent deal. On 24 August 2010 Ben Haim played his first game for West Ham, against Oxford United in the League Cup, in a 1–0 victory.

In January 2011, Ben Haim returned to Portsmouth after his loan spell expired, but he had still not been added back to the squad when the transfer window closed and did not make any appearances for Portsmouth that season. He was in dispute with Portsmouth over £1.4million in unpaid wages. Because of this, manager Steve Cotterill was unable to select Ben Haim for the final fixtures of to 2010/11 season. The case was set to go to a Football League hearing in July 2011, but with new owners (CSI) installed at the club, Pompey were able to reach an acceptable agreement with Ben Haim.

On 11 July, Ben Haim made his first appearance for Pompey since the 2009-10 season in a 4-0 pre-season win over Havant & Waterlooville.

Tal Ben Haim will leave Pompey this summer. That is the pledge from his agent, Pini Zahavi, following the Blues’ relegation. The Israeli international has another 12 months remaining on his contract. It is understood that is worth close to £2m in wages.

Ben Haim, however, has no intention of playing League One football. Instead, Zahavi insists there is interest from clubs in taking the 30-year-old defender.

It remains to be seen whether the Blues would have to engineer his exit through a mutual consent agreement. Regardless, ‘super agent’ Zahavi is adamant he will depart in the close season.

Ben Haim’s departure would be a massive boost as Pompey look to slash their soaring wage bill. His reported weekly wage of £36,000 is also a potential stumbling block to attracting new owners.

The former Bolton man has been a controversial figure throughout his time at Fratton Park. He angered fans on Saturday after snubbing the players’ lap of appreciation following the defeat to Derby. Despite being present at the game, he has also been accused of refusing to sign autographs for youngsters.

Now, according to Zahavi, Ben Haim is set to go. He said: ‘Tal will not play in League One next season. ‘There is interest in him from other clubs. ‘We are looking and when there is something to announce I will announce it. ‘But he definitely will not be playing in League One for Portsmouth.’

Ben Haim has epitomised Pompey’s mismanagement in recent years. He signed his reported £36,000-a-week four-year deal in August 2009. At that time, Peter Storrie was chief executive, with Sulaiman Al Fahim the owner.

Ben Haim has gone on to make 57 appearances for the Blues. However, he has missed the past five matches with a calf problem.

His snub for Saturday’s lap of appreciation has been widely criticised by Pompey fans. Fratton end season-ticket holder Del Pulley said: ‘The man is completely out of order. The sooner we get shot of him the better. ‘We don’t need people like that at this club. ‘It is meant to be about people pulling together but he is just not interested.

‘What he did on Saturday was a lack of respect to the fans and the football club. ‘There is no room for that at this club. Good riddance.’

Meanwhile, Glyn Tookey claims he confronted Ben Haim after the player refused to sign autographs after the match with Derby. Tookey, from Gosport, said: ‘I saw Ben Haim refuse to sign autographs for young fans.‘The guy is a disgrace. ‘He was politely asked but brushed off their books with his hand and walked away. ‘I got angry and had a go at him about it. He was arrogant and rude.’

Ben Haim was unavailable for comment, while Zahavi insisted he knew nothing about the defender’s alleged snubs.